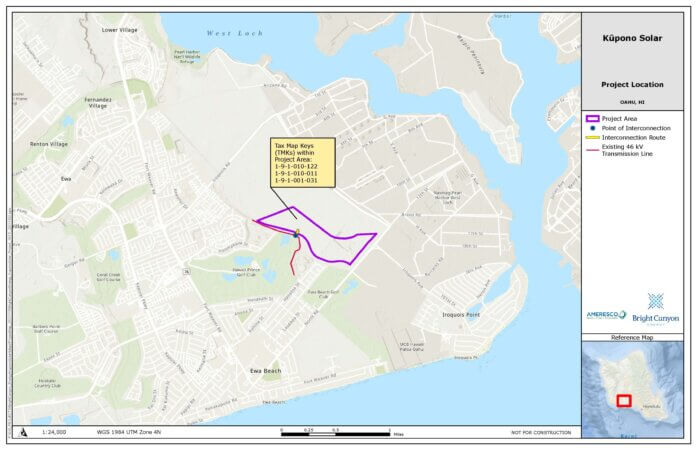 Ameresco Inc. and Bright Canyon Energy, an energy infrastructure developer, are engaged on the proposed Kūpono Solar Project, a mixed solar and battery system to be constructed on the Joint Base Pearl Harbor-Hickam West Loch Annex in Hawai‘i.

The mission is designed to ship 42 MW of renewable energy to Hawaiian Electric’s grid on the island of O‘ahu.

Ameresco has been implementing energy options in Hawai‘i for over 15 years. Similarly, Bright Canyon has been creating energy infrastructure options since 2014. In 2021, Ameresco and Bright Canyon established a three way partnership often called Kūpono Solar Development Co. LLC to associate collectively to advance the Kūpono Solar Project. This is the primary mission for the three way partnership to deal with renewable energy, energy safety and resiliency on O‘ahu. In help of a Department of Defense long-term energy safety initiative, Kūpono Solar signed a 37-year land lease with the Navy to supply vital energy resiliency upgrades. The lease gives the usage of roughly 131 acres of underutilized lands inside the Navy West Loch Annex of Joint Base Pearl Harbor-Hickam.

The mission consists of the set up of a 42 MW photovoltaic solar array and 42 MW/168 MWh (four-hour period) of lithium-ion battery storage system. The batteries will retailer solar energy past sundown hours, enabling the mission to ship sustainable, renewable energy to power roughly 10,000 houses on O‘ahu. In addition, this clean energy project will be designed to reduce more than 50,000 tons of carbon dioxide annually from Hawai‘i’s atmosphere – the equal to offsetting emissions from 12,000 vehicles yearly.

“The Navy is excited to see this joint Kūpono Solar/Hawaiian Electric project move forward for our community’s benefit,” says Capt. Randall E. Harmeyer, Joint Base Pearl Harbor-Hickam’s public works officer. “This enables us to put 131 acres of underutilized land to long-term, sustainable use for Hawai‘i at a time when the cost and reliability of worldwide energy supplies is of great concern and reflects the Navy’s core commitment to energy security and resiliency for America.”

Ameresco and Bright Canyon are working to carry numerous clear energy options to Hawai‘i, and that is the primary mission supporting this massive, long-term energy resiliency plan.

“We are excited to be working with the Navy, Hawaiian Electric, and the community on this important sustainability project in Hawai‘i. The energy generated and stored on this underutilized land will directly benefit the residents, businesses, and communities of O‘ahu,” states Nicole Bulgarino, govt vp at Ameresco. “In addition, it will replace energy generated by burning fossil fuel, thereby reducing emissions and greenhouse gases and create a cleaner, healthier place for residents to live, work and play.”

“This project aligns with the energy priorities and policies set forth by the state of Hawai‘i, including the 100 percent renewable energy and carbon neutral goals by 2045,” mentions Jason Smith, basic supervisor of Bright Canyon Energy. “We are committed to working with Hawaiian Electric, the Navy and the local community as we move forward with this exciting project that will deliver a range of benefits for the clean energy future of O‘ahu.”

Construction is predicted to be accomplished in early 2024. Kūpono Solar, the three way partnership, will personal and function this solar and battery mission underneath a 20-year power buy settlement with Hawaiian Electric.

RE+ begins! Let’s gush in regards to the return of the most important clear energy present in North America