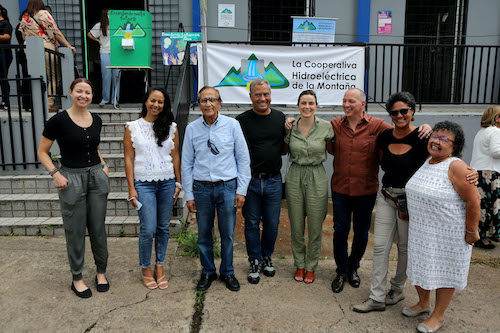 The rural neighborhood of Castañer, Puerto Rico celebrated the primary part of a solar-plus-storage microgrid set up that may present steady and dependable electrical energy to power native companies and important providers. The microgrid was developed in a collaborative course of led by the Puerto Rican Solar Business Accelerator (PRSBA), together with the nonprofit Cooperativa Hidroeléctrica de la Montaña and the University of Puerto Rico – Mayagüez. The PRSBA program, led by the Interstate Renewable Energy Council (IREC) and Pathstone Corp., is funded by the U.S. Economic Development Administration.

The undertaking is the primary to be put in within the central mountain area of Puerto Rico. The first part of the microgrid will power native companies and two EV charging stations, totaling 40 kW of solar PV and 35 kWh in battery storage. When the following phases are added, the entire microgrid will embrace roughly 225 kW in solar PV and 500 kWh in battery storage. Installation and growth of the microgrid was led by a neighborhood solar firm Borintek.

Castañer is situated in an remoted space between the cities of Adjuntas, Lares, Maricao and Yauco, which endured greater than six months with out power after Hurricane Maria in 2017. The first part of the microgrid is designed with the objective to offer uninterrupted electrical power providers throughout future emergencies. The first real-world take a look at was profitable. The microgrid continued to offer electrical energy to the companies when a hearth at a power plant brought about an enormous island-wide blackout in April 2022.

“After several months of work with the Cooperativa Hidroeléctrica de la Montaña and the University of Puerto Rico, we can see the result of our collaboration in the well-being of the Castañer community,” says Loraima Jaramillo Nieves, program supervisor at IREC. “This microgrid is the first of many great projects that are coming up in rural Puerto Rico.”

“I visited the town of Castañer several times after Hurricane Maria, and I could see how the businesses made numerous efforts to maintain services in the community,” feedback Maribel Hernández, assistant supervisor of the undertaking. “The residents were plunged into darkness for more than six months. The lack of electricity affected their quality of life since they could no longer attend to food and medicine needs. This is what motivated us to launch, through the Cooperativa Hidroeléctrica de la Montaña, our first Resiliencia Energética Fotovoltaica Comunitaria (ReEnFoCo) project through the Castañer microgrid.”

This is the primary of two microgrids that might be developed with the help of the PRSBA. The second might be in Maricao.